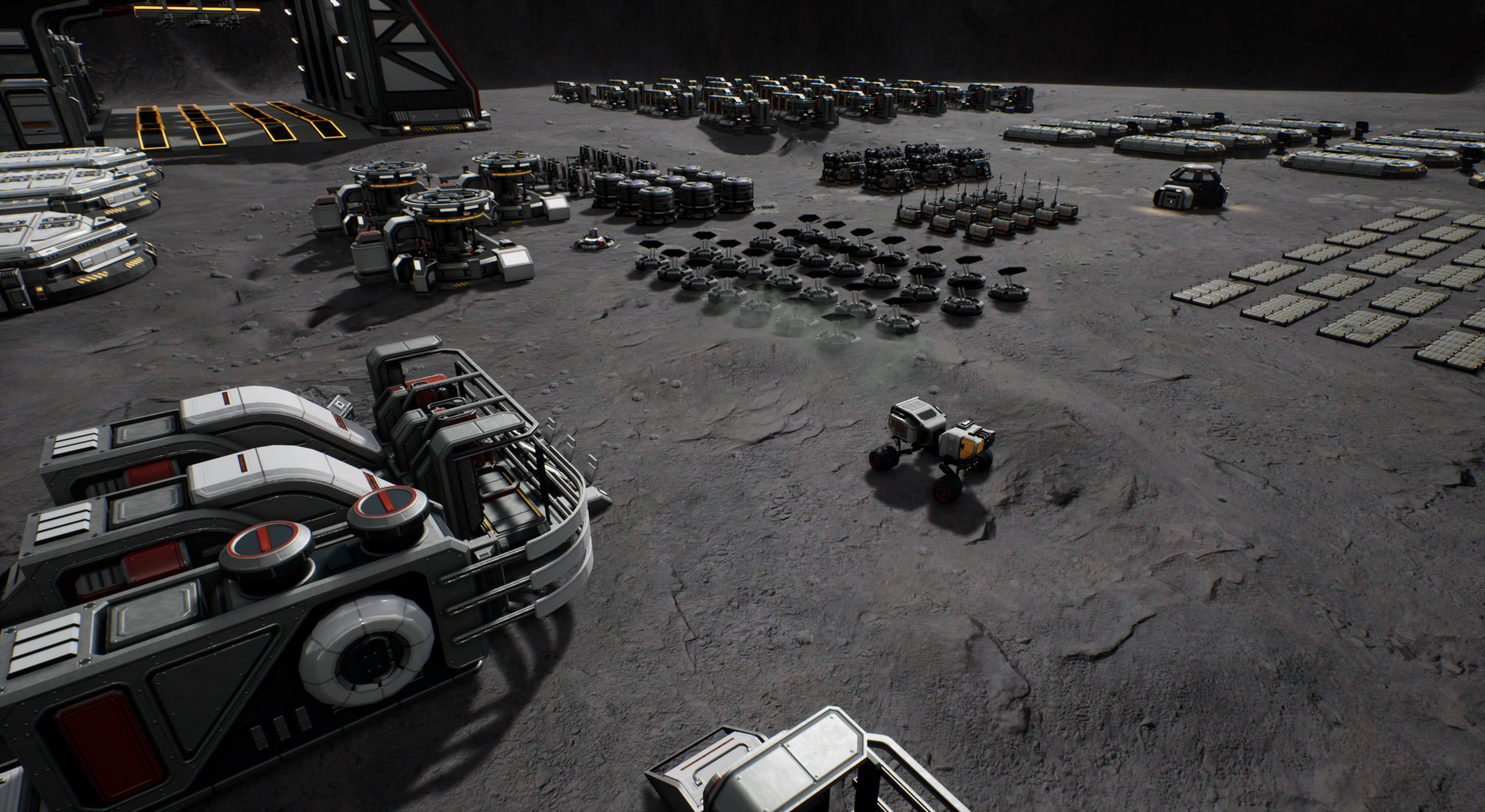 Good day everyone! It's been a long time since we've posted anything about the game and it's time to fix that. Besides, we really have something to share - during this time a lot of hard work went into the game. So, what exactly has been done?

Visual improvements have always been an important part of our development process and we are happy to report that we have been able to make a drastic difference over the time with almost no loss of performance (almost). The light itself became more dynamic and shadows became more natural, and the whole picture became much more pleasing to the eye.

We all know that it's to "show, don't tell" and not vice versa, so check out some new screenshots. We really hope you'd like them too. (our tech-artist Andrey hopes for it doubly, for most changes are his merit). 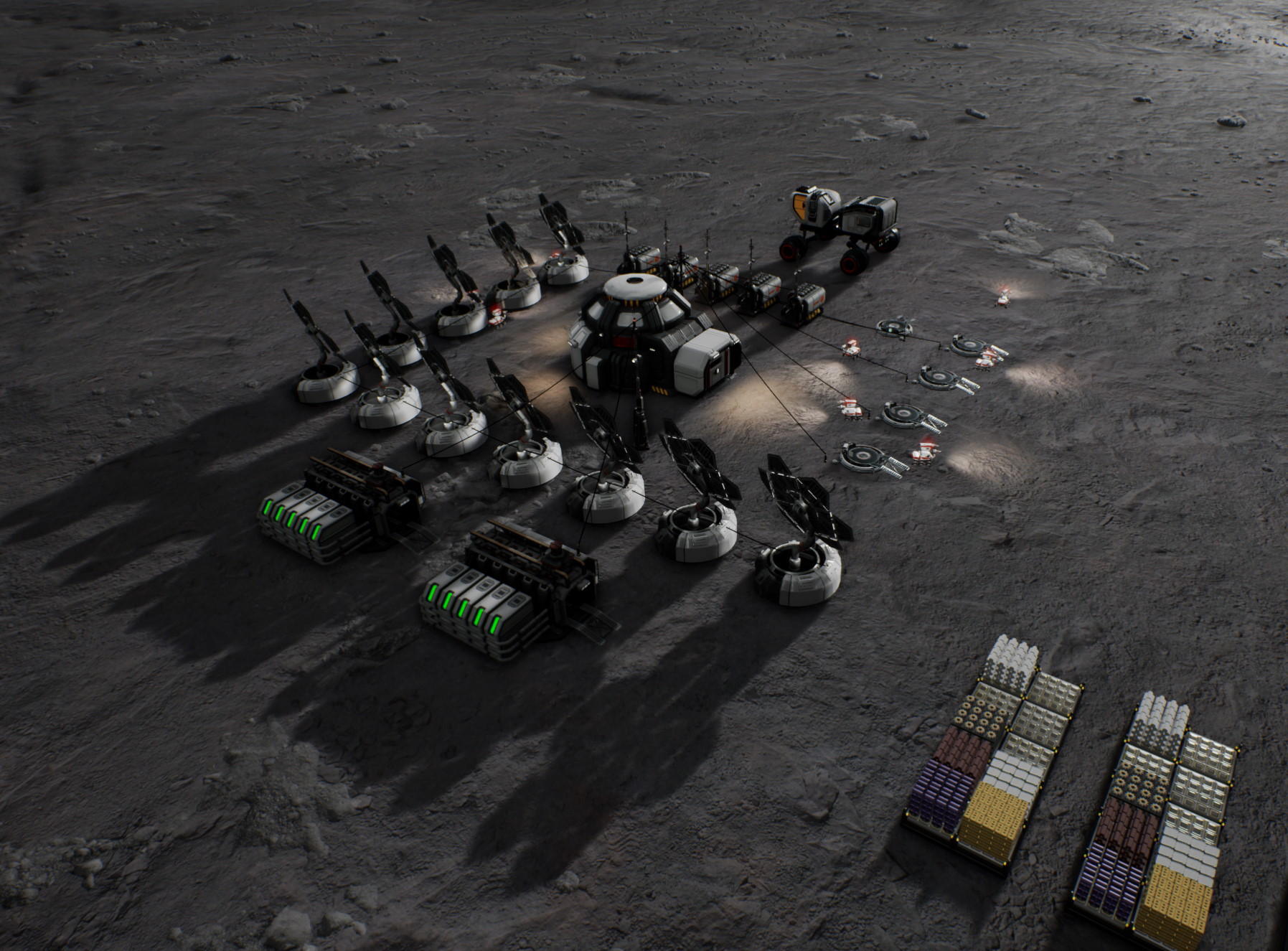 New visuals on the moon surface and beneath it, respectively

Under this term, we include the work of optimizing drone AI, polishing gameplay mechanics, and our attempts to increase FPS/sec in general. In The Crust, drone builders are controlled by artificial intelligence, which assigns tasks to drones based on player activity without direct player input. In other words, you just decide where and what to build, and the drones do the rest for you.

It sounds simple, but if you add several new tasks to this pool at once, and also take into account updating current tasks (such as moving resources, repairing, dismantling modules, etc.), it was an extremely difficult task to make the system work according to player expectations, even at the " ok" level. It is hard to believe how many man-hours were spent on the monotonous observation of this "ant farm", finding issues in places you couldn't even imagine and making all sorts of adjustments. Finally, we are very happy to report that we have reached the point where we are quite satisfied with its functionality. The drones build, carry, dismantle and repair accordingly, as well as being responsive to player preferences regarding the hierarchy of incoming and existing tasks. We thank our programmer Oleg for bringing law and order to the ranks of the iron dummies!

You can see how the player only does the planning, the rest our drones take care of

And now we've reached the main course, something that radically changed the gameplay - the conveyor belt! Of course, the idea is not like a brand new one, but for us and for the project it became a completely new page. And we are extremely happy to share it with you!

We are very happy with the way this looks and plays. The addition of conveyor belts has allowed the game to unfold in a new way - it completely overhauls the resource distribution system, allowing both the player and the drone AI to focus on more important tasks. Our conveyor belt not only takes one resource along a route, but can figure out what to bring in and where to bring depending on the final destination of the belt itself. Or you can move some part of the conveyor belt underground, that would leave more space for other stuff and makes it faster overall. Our programmer, Lev,also known as Tiger, spent almost all summer in the office, implementing all the features of the conveyor belt, and by the way, did get any extra days off for this. You know,classic stuff.

There is still plenty of work to be done, in some cases even too much, but we are satisfied with the pace of development and its results and genuinely hope that you will be able to try them out as well.

P.S. Maybe even sooner than you think.